From the the latest to the earliest.

What are the books about, and how did they come to be written?

Tales from the other side of the Ardèche

This is a collection of short stories I've written over the years. I thought it was a pity to leave them in a drawer. I also illustrated them. They were written for various competitions, or as part of the short stories members of the Cercle des auteurs ardéchois write for the summer editions of the weekly La Tribune. And as my English is getting quite rusty, I asked my sister Judith, who is not influenced by the French as I am, to have a look. And what a good idea that was! So many thanks to her for her work. The only connection between them is that they were written down here in lovely, sunny, southern Ardèche. We could add that a lot of them are tongue in cheek. 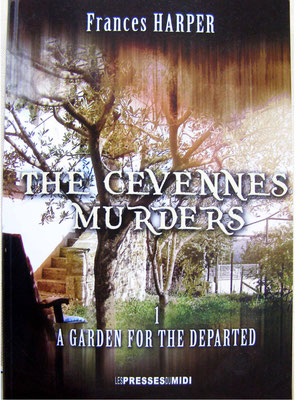 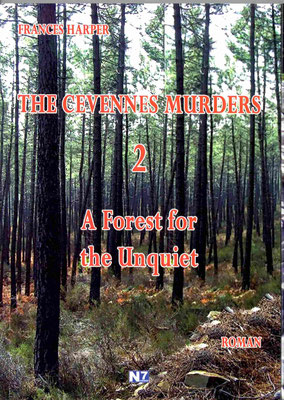 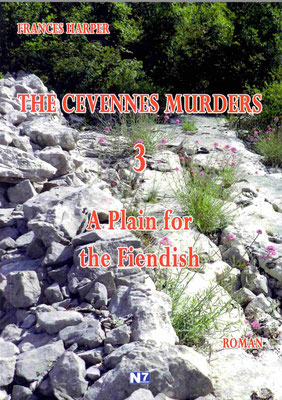 The main character, Noel Tavares, and his cat Marmalade arrive in a small village in the Cevennes. He's there for a year, a sabatical, he says. Where does he come from and what does he do? This is the mystery at the heart of "A Garden for the Departed". Noel has special capacities. He can feel the invisible. And so can his cat. They are therefore able to help the villagers solve some mysteries that arise from the past. This book won a regional manuscript prize and was quite successful. The readers wanted to know who Noel was, hence the second volume, "A Forest for the Unquiet", which made Noel even more mysterious as he becomes embroiled in a world of deceit in a neighbouring village. Half-way through writing this one I realised that a third one could be written, bringing to an end his year. "A Plain for the Fiendish" saw the light of day. Without realising it I had written a series in which the first book took place in the past, the second in the present and the third in the future, for in this story Noel "sees" what's going to happen and tries to stop it. He also comes face to face with his own past.

Also, without realising it, I had written a total of seven deaths, and that meant that the general title with the word "Cevennes" as pronounced by the English became a play on words!

Unfortunately, for the moment, I've none of the 1st book left in English.

Illstrated handbook of the French Revolution

Researching into Boissel meant that Pierre did a lot of digging into the French Revolution itself, and he came up with the idea of writing a handbook summarising the major points of this great event clearly and succinctly : the people involved, the major events that provoked the people, the main events as the Revolution unfolded. 89 prints from the time illulstrate the book. He knew that the English are also interested in this subject, and wanted it translated. We came up with the idea of publishing a bilingual book.

The Riddle of the Wooden Bombs

The subject of this book is contreversial : the Allies dropped fake bombs on German targets to show that they were well aware of the enemy's fake military sites. This has long been denied by the military instances. However, Pierre collected testimonies from veteran air crew members from France, Germany, Italy, The USA, the UK, as well as testimonies from people living close to sites that were bombed and who saw these fake bombs. He personally interviewed several of the witnesses, and photographed artefacts belonging to them. The book contains a large amount of photographs. Again, the translation of this text lead to an enormous amount of research. I was able to use my own brother's brain on several accounts for aircraft terms, as he is ex-RAF. He remains however sceptical about the reality of the subject.

The Child who talked to the Stars

Pierre is also interested in astronomy, and, influenced by his work as a teacher, he embarked on a story about a boy whose grandfather has died, and seems to reach out from the cosmos through a site on the internet. Not only does the child learn about the physical aspects of the solar system, but also gets an insight into the philosophy of life in general, which enables him to come to terms with his grandfather's death. Pierre may have meant this book for youngsters, but in fact it can be read by adults. Translating it meant a great amount of research into the technical terms on my part.

François Boissel was born in Joyeuse, Ardèche, in the 18th century. He lived through the French Revolution, was imprisoned for his ideas on private property, the equality of men and women, marriage, and a lot of socialist ideas way ahead of his time, that he published in several books. He is completely unknown. Pierre Antoine Courouble, who lives in Joyeuse and is keen on history, dug into his life and wrote a play. He also succeeded in publishing the original books by Boissel. He asked me to translate his play into English, which was no mean task, as his play is about the meeting between a 20th century student and the 18th century Boissel, and therefore contained modern and 18th century French, something I had to maintain in the English version. Thus it took me a whole afternoon to find an equivalent in English of a joke containing a play on words in French in which the same word no longer had the same meaning for the people using them.